Cassava root is one of the main parts of the traditional Brazilian diet, as it is the source for manioc flour, a key ingredient in the Brazilian traditional dish called farofa. Farofa, if you didn’t know by now, is commonly served alongside other dishes, but is most associated with the famous dish feijoada.

You might be wondering what the health benefits of cassava root are, since it’s so often used in Brazilian cuisine. The following is a list of those benefits, and some might surprise you. Before we go forward though, we have to warn you that if you prepare cassava root at home, you mustn’t eat it raw, as raw cassava contains toxic levels of cyanogenic glycoside compounds called linamarin and methyl-linamarin. Cooking the root, boiling in particular, reduces these compounds to safe levels.

Now that we’ve given you a ‘heads-up’ about the dangers of raw cassava, let’s continue on to the benefits that cooked cassava has in store for you!

1) Healthy Carbohydrates. While some might worry that cassava root is pure carbohydrate, it’s actually a healthy form of carbohydrate that’s low on the glycemic index, and contains essential dietary fibre. So it’s not only safe for diabetics, it’s good for anyone who’s trying a low-carb diet as a means to lose weight. Paired with plenty of vigourous exercise, cassava is an excellent addition to your diet regimen.

2) Gluten-Free. There’s a reason why coeliac patients have long been reaching for cassava, or manioc flour for their recipes: cassava root is gluten-free. Therefore manioc (aka ‘tapioca’) flour is an excellent thickener for sauces and gravies that otherwise take regular flour. Even if you are merely gluten-sensitive, and not fully coeliac, manioc flour will still assist in your well-being, and adventurous cooks can try learning how to use this flour in their baked treats for the holidays so that coeliac patients don’t have to miss out on Christmas and New Year’s goodies.

3) Rich In Vitamins and Minerals. The humble cassava root may not look like much to the uninitiated, but those who’ve done the health research know that cassava not only contains dietary fibre, but is rich in iron, calcium, copper and magnesium. Copper assists in preserving healthy nerves and magnesium is essential for brain, skeletal and cardiovascular health. Potassium joins magnesium in regulating blood pressure, and cassava is a good source. Cassava also contains Vitamin K (promotes bone health) and Vitamin C (immune health) as well as moderate amounts of certain B vitamins such as folate, pantothenic acid (B5, which is good for hair), thiamine and pyridoxine (B6). Last but not least, you’ll also be getting zinc and manganese, in addition to Vitamin E, the latter of which is good for skin. 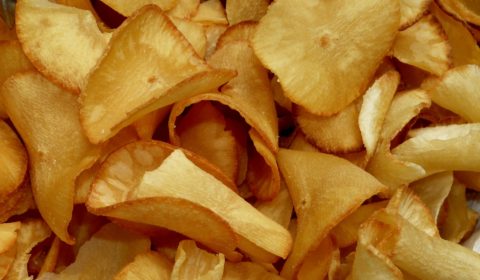 Since cassava is lower on the glycemic index, cooked and mashed cassava root makes an excellent substitute for white potatoes. Season the mashed cassava root with garlic or other herbs and you’ll have a tasty, high-fibre, low-carb treat that won’t send your blood sugar spiking. You can also, of course, learn how to make farofa to pair with feijoada, if you want to start incorporating Brazilian cuisine into your cooking repertoire.

Now that you know that cassava is a highly beneficial food, you can start adding it to your dietary regimen as part of a healthy lifestyle, as well as a tasty complement to your knowledge of world cuisines.