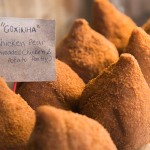 There is perhaps no Brazilian street food more delicious and well-known than the world-wide famous coxinha.  The coxinha is traditionally formed to resemble its main ingredient: chicken.  The golden, crunchy outside of the coxinha surrounds a layer of soft dough filled with moist shredded chicken, tomato, onions, parsley, scallions, and sometimes different cheeses.  The doughy pocket is closed off and deep-fried, creating a crispy, mouth-watering snack that can easily be eaten in three or four bites.  In Brazil, everyone has their own way of eating a coxinha.  Some people prefer to eat coxinha at breakfast.  For others, it is strictly a lunch or dinner snack.  Others won’t eat a coxinha without some red-hot pepper sauce on the side to dip each bite.

But did you know that the coxinha used to be made of chicken thigh?  The word “coxa” in Portuguese actually means “thigh”, when using the word in reference to chicken.  However, that is far from the entire history of the coxinha.  Legend has it that towards the end of the 19th century, a Brazilian king and queen had a son.  This son was kept out of the public eye, as he had been diagnosed with a mental illness.  He refused to eat food brought to him by the king’s many chefs.  However, one afternoon, a chef brought him some cooked chicken thighs.  The boy ate them happily and refused to eat anything other than the chicken thighs this chef made for him.

The chef continued to cook this meal for the boy every day, until one day she realized with fear that they were entirely out of chicken thighs.  She acted quickly and remembered that there were plenty of leftover chicken pieces from the day before.  She took the leftover chicken meat, wrapped it in dough, and molded it to look just like a chicken thigh.  When the chef brought this to the boy, she told him it was a special chicken thigh, a “coxinha”, that was fit only for royalty.  The boy ate the meal and loved it so much that he changed his diet from chicken thighs to “coxinhas” only.  Soon, the other royalty in the house began eating the new concoction as well, and over time the “coxinha” grew famous throughout the country and then throughout the world.

The coxinha won over the hearts (and appetites) of royalty, but now it is a delicious snack enjoyed by all.  Traditionally, a coxinha is sold as street fare in Brazil.  However, the coxinha varies in size.  Sometimes they are made in bite-size pieces or other times they are as large as the chicken thighs they are shaped to represent.  While no one can know, perhaps the boy in the story loved the meal so much, as the “secret” to a perfectly cooked coxinha is patience.  Our chefs use only the freshest dough and ingredients, and they take the time to coax all the succulent flavors together to make a coxinha truly fit for a prince.