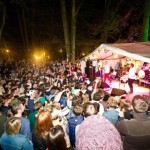 Are you looking for different things to do in London? Hhow about a festival in the middle of the wood? The small but perfectly formed In The Woods festival – organised by the perky and freewheeling leftfield London pop quintet Laurel Collective – returns for its ninth consecutive year, stretching out into a two-day affair for 2014. Punters are promised an experience as far removed from “warm pints of foamy Carling in a copoorate mudbath” as it’s possible to get, which can only be a great thing.

It takes place in a secret woodland location (enchanted, of course) near London, revealed only to ticket holders. The line-up for this year’s festival won’t actually be announced before the festival – an innovative anti-hype manouevre – but past acts like Ghostpoet, Kwabs, Micachu and The Shapes, AlunaGeorge, Anna Calvi, Alt-J and more cutting-edge acts on the cusp of fame should give you an idea of what’s on offer.