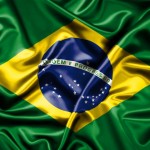 What can inspire more patriotism for a country than to see its flag flying high, majestically billowing in the air against a cloudless blue sky? For Brazil, their flag’s colors, the stars and its elements, and its intricate design stands out both in the sky and in the memory of its countrymen. Brazilian history is brimming with strength and patriotism. At first, this country was independent as the Brazilian Empire. Then, Brazil changed to a republic in 1889, the same year that its flag was created.

The history of Brazil’s flag dates back to November 5, 1889. Marechal Deodoro da Fonseca defeated the then Emperor, Pedro II. From there, Brazil was declared a republic. At the dawn of the new Republic of Brazil, Ruy Barbosa, a writer and diplomat, created a design for a new flag. Inspired by the American flag, Barbosa created the flag and it flew high on November 15, 1889. However, just four days later, Fonseca, the provisional president of Brazil, had other plans. He vetoed the flag, claiming that it looked too much like America’s.

Fonseca decreed that a different flag needed to be designed, one that would resonate with the people of Brazil. He wanted the flag to be a tribute to the past monarchy and founders of Brazil. Therefore, he chose the color green to stand for the first Emperor, Pedro I. He included yellow, to represent Pedro’s companion, Maria Leopoldina of Austria. The blue globe, stars, and the written words gave the Brazilian flag deeper meaning. The flag was meant to be a sign of bravery in the face of change, a sign of metamorphosis from an Empire to a Republic. It was Raimundo Teixeira Mendes’ design that held all these elements. It was the flag that Fonseca approved, and it is the flag that is still flown in the great country of Brazil this day.

Brazil’s flag is one of most complex flags to ever be created. The national flag has a blue disc showing a starry night sky. In the center, a ribbon of words spans the disc. The words contain Brazil’s national motto: “Ordem e Progresso” or “Order and Progress”. This simple yet profound motto is taken from August Comte’s positive quote. “L’amour pour principe et l’ordre pour base; le progrès pour but”, meaning “Love as a principle and order as the basis; progress as the goal”. This eloquent motto along with the blue sphere rests inside a yellow rhombus, and the yellow rhombus is held inside a green field.

The next time you see the Brazilian flag at the World Cup, outside a Brazilian restaurant, or flown high in the country of Brazil, pay close attention to the details. You won’t just see bright colors and intriguing design. You’ll see Brazil’s rich history and the embodiment of the emperors and founders of the country’s past.