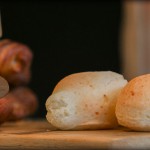 Pão de Queijo.  The words may not mean very much to someone who lives outside Brazil, but to natives of Brazil, the words may as well mean “heaven on a plate”.  This delicious cheese bread is a popular Brazilian breakfast food or snack that is widely sold at coffee shops, snack bars, and bakeries in Brazil.  Pão de Queijo (also called Chipá or Cuñapé) has a long history in Brazil and is one of the most common (and most decadent) accompaniments that you’ll find at restaurants in their country.  Luckily, Pão de Queijo has made its way into the surrounding continents of Europe and the United States and is becoming more and more readily available to hungry fans of Brazilian cooking.

Where did the baking of Pão de Queijo start?

Where did the baking of this tasty cheese bread start?  The best guess historians have is that it was first baked hundreds and hundreds of years ago in Paraguay, Northern Argentina, South-eastern Bolivia and areas of Brazil for as long as humans have inhabited the area.  When it was first made, the Guarani people baked Pão de Queijo with water and cassava starch.  Then, the arrival of Jesuit missionaries and the colonists brought cattle, chickens, and other livestock to the area.  Along with the livestock came the products derived from them, namely cheese and eggs.  Pão de Queijo began to take its claim to fame over the years, becoming a country-wide sensation in Brazil in the 1950s.  Over the year, this cheese bread has gone through many scrumptious variations until we now have Pão de Queijo served up around the world in the 21st century.

Nothing can compare to the mouthwatering taste of Pão de Queijo

While nothing can compare to the mouthwatering taste of Pão de Queijo, it can perhaps best be described as a Brazilian version of fresh cheese gougères, which can be found in France.  To make this cheese bread from scratch, chefs start with a distinct type of dough.  Pão de Queijo’s dough is made from cassava starch.  For those only hearing of this starch for the first time, the starch produced by the cassava root is very powerful and is essential to the texture and size of Pão de Queijo.  This starch is finely milled and provides the cheese bread with its texture.  While most breads call for leavening, this dough has small air pockets that expand during baking.  The dough is kneaded and mixed with hot milk, eggs, and of course, delicious cheese.  Then it is rolled into balls to bake immediately or else the dough will liquify.  Finally, the rolls of dough are popped into the oven, and the cheese bread goes straight from the oven to your table.
This crusty, chewy, doughy, soft cheese bread is exactly what anyone would love at breakfast, lunch, dinner, or any time in between.  But please, don’t take our word for it.  Come by and experience these must-have crispy, cheesy snacks that give you both a taste of sensational cooking and a taste of the culture and history of Brazil.  Pão de Queijo goes perfectly with drinks, other appetizers, full meals, or can be enjoyed simply by itself.