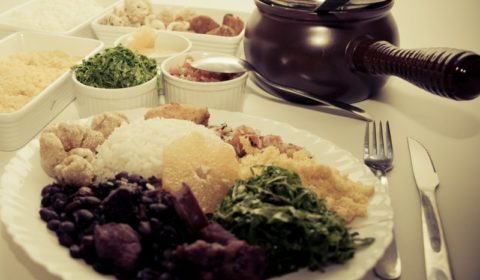 If you’ve never had feijoada (fay-ZHWA-da) before, this will give you a bit of back story to the dish so you know how it came to be.

Beans Are the Beginning

While feijoada usually has meat in it (usually various cuts of both pork and beef), in reality, the history of the dish centres around beans. The truth of it all lies in the root of the word ‘feijoada’, which is feijao, the Portuguese word for ‘beans.’

There is a legend that slaves were the ones to create and introduce feijoada, cooking the alleged unwanted parts of their masters’ salted pork bits: the tail and ears, for example. However, it’s come to light recently that this legend is just that: a legend. The truth is, of course, always more complicated as well as interesting.

Let’s go back to the very beginnings of feijoada, which takes place in the 1500s, sometime after the discovery of Brazil and its famous black bean crops. These specific beans were introduced to the Portuguese as a result of the discovery of Brazil, and were deemed a flavourful favourite to use in what historians now know is a very Roman-military-based mix of beans, meat and vegetables, known by other European names such as paella in Spain (though that dish is more rice-based), cassoulet in France, and so on.

If the slaves in Brazil did cook meat with their beans, it was allegedly a very paltry piece, which may have given rise to the legend of the ‘unwanted pork parts.’ However, those reputedly undesirable pork parts—the tail, ears and feet—were actually considered delicacies among the Europeans, so that part of the legend is most patently false.

Regarding the veracity of the legend about feijoada being associated with slaves: most people think about the ones brought from Africa, and not so much about the local South American natives that the paulistas, or Portuguese slave traders living in Sao Paulo, would capture.

Also, both the native slaves and the Africans brought over to Brazil had food taboos. The natives’ taboo tended to be about not completely mixing meat with beans or vegetables, and the African people’s taboos were likely Muslim in practice and/or influence, thanks to the religion forbidding pork consumption.

Ultimately, therefore, the origins of feijoada are not so much about the slaves, but more about the rather refined, meat-centred European palate and how the Roman tradition of meat, vegetables and leaves was brought to Brazil. The addition of Brazil’s famous black beans to the dish ended up resulting in what you now know as feijoada, which is essentially the way that the Portuguese living in Brazil adapted the common bean-centred meal to their meat-centred tastes.

How is Feijoada Served?

In Brazil, feijoada often arrives at your table accompanied by farofa (a side dish made of manioc flour, vegetables and most often eggs or bacon), orange slices, rice and steamed cabbage. To complete this traditional Brazilian meal, try a ‘batida,’ which is somewhat similar to a caipirinha, as it’s made with citrus fruit, sugar and cachaca.

Just about every food in the world has a story, even a legend, behind it, as well as regional variants that take into account seasonal availability of regional ingredients. Feijoada is no different, and once you take a taste of this famous dish, you’ll understand why it not only has its place in history, but also why it’s become such a favourite of anyone who loves Brazilian cuisine and culture.